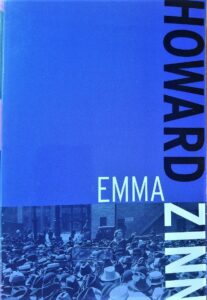 According to Goldman art and theatre should not function as an escape from reality but instead reflect life and societal conditions and in this way serve as “dynamite” in order to change and create solidarity, Lisa Gålmark writes about Emma Goldman.

Early on Emma Goldman (1869–1940) defended the maxim “the end justifies the means;” however, after having met Lenin, and experienced how the Russian revolution evolved into authoritarianism, she took a noncompliant stance and was forced to flee from her revolutionary comrades. Revolutionary methods ought not deviate from the goal; freedom of speech cannot be restricted; the right to a dissenting opinion is the very revolution, Emma Goldman argues in her book My Disillusionment in Russia (1923). ”Revolution is dissent,” as actor Warren Beatty says when staging as the American journalist John Reed in the film Reds (1981). Although the quote is from Goldman, a more renowned name, and despite the fact that there is a well-written two volume book title to use as a starting-point – an autobiography which has been called one of the finest in English.

Historian Howard Zinn wrote the play Emma in the 1970s in tribute to Goldman’s work for the workers’ movement and the right to freedom of speech; the liberty in the First Amendment of the American constitution and the constrictions Emma Goldman experienced from local politicians, industrial men, the police and their sabotage and arrests of her; and finally, when she was deported in 1919, directly from the state. Her beloved USA delivered in so far as it stated liberty rights in the constitution, however it did not deliver in practice, a fact which, to her, the thinker, agitator, and writer, confirmed that education and erudition are of more importance than legislation. To be arrested and put in prison for having exercised a natural and formal right constituted an absurdity.

In 1893 Emma Goldman was interviewed as a sincere political thinker of wide public support – especially from women – by the country’s foremost muckraking journalist, Nellie Bly at the New York World. A few years later, in 1897, Goldman summed up her women’s rights demands in a critical speech about marriage, “I demand the independence of woman, her right to support herself; to live for herself; to love whomever she pleases, or as many as she pleases. I demand freedom for both sexes, freedom of action, freedom in love and freedom in motherhood.” Free sex and love encompass what she called the “intermediary sex,” that is, same-sex sexual liberation. She distanced herself from the institution of marriage and even regarded the prostitution of the time as a slightly better confinement than marriage with its unpaid labour and sexual slavery in the home. She rebutted all moralism and emphasized that the phenomenon of prostitution has economic and social causes: domestic abuse, low wages, and a hypocritical view on sexuality.

Women’s liberation is not about asking for equal rights, those rights which all humans already have (but do not believe and know that they have), but about women on their own and together freeing themselves from the puritanism of society and of religion. Women must “refuse to serve God, the State, the Society, her husband, her family by making her life simpler though deeper and more valuable, and by freeing herself from the fear of people’s opinions and judgements.” Free love, Goldman asserts, is not the same as loveless relations, but rather equal and considerate relationships.

Also as a general movement anarchism must be life-affirming and liberating. At a political meeting followed by dance she was criticized by a male comrade who thought it was undignified and improper of an up-and-coming agitator to dance as wildly and free as Goldman, whereupon she answered: “[T]he movement should not turn into a cloister. If it meant that, I did not want it. I want freedom, the right to self-expression, everybody’s right to beautiful, radiant things.” By things she meant, according to her autobiography, “flowers, music, theater.”

The art of theatre – the last-mentioned “radiant thing” – is more than an example.

Theatre and aesthetics is a forgotten but in her time much appreciated part of Goldman’s oeuvre. Particularly in the beginning of her career she spoke deliberately without prepared notes, “I look forward to hear what I am going to say.” The courage to liberate herself by speaking on any subject, no matter the consequences, shocked and captivated the audience. Eventually she started directing herself and her lectures, also as performance; chaining herself to the stage to hamper the police from arresting her; muffling herself by putting handkerchiefs in her mouth to illustrate the restrictions of the right to freedom of speech.

As historian Candace Falk has highlighted, Goldman’s lectures developed into a theatre of speech which circumvented censorship and progressed demands for freedom. Art and theatre should not, according to Goldman, operate as an escape from reality but mirror life and social conditions, and in that way become “dynamite” for social change and solidarity. In a time when the subject of unjust and narrow conditions for workers and women was taboo, Goldman’s free speech theatre took giant leaps for the workers’ movement and feminism thus also for people’s power over their own lives. Following the lecture series in the USA 1909-1916, Goldman published the book The Social Significance of the Modern Drama (1914) about her favourite playwrights. In the book she gives tribute to August Strindberg, Henrik Ibsen, and G.B. Shaw. Theatre can and should diffuse socially significant ideas, she writes and agrees with Strindberg’s opinion on women’s rights (minus voting rights) as he promotes them in Giftas I: Women’s rights must be part of the class struggle.

She spoke about theatre to mine workers during their lunch break several hundred metres below the ground and to women’s societies in luxury saloons. She lectured about theatre in Yiddish in New York and founded drama societies in the cities she visited; for a period she worked as a manager of a Russian theatre group touring the USA. The playwright Eugene O’Neill (Nobel laureate in literature 1936) appreciated her work; he based one of his characters upon Goldman’s personality and sent her his play (The Iceman’s Cometh, 1939; Si, iskarlen kommer! Översättning Sven Barthel, 1947) when she was in prison. When in exile in Russia, Goldman met the theatre man Konstantin Stanislavskij, and later in England on tour 1925, she tried to get her manuscript published about the link between social conditions and the modern Russian dramatists Gogol, Gorkij, Tjechov, Tolstoj, Turgenjev. By that time her theatre lectures from 1909 were disseminated across the globe to Japan, China, Spain, and various places in South America.

As an editor of her own magazine about literature and politics, Mother Earth, Emma Goldman accentuated the value of aesthetics. One time, in her absence, the editorial board published an issue with bad and vulgar language, making Goldman furious; liberation from inner and outer oppression is the fundamental precondition for literature and art, however that which is freely expressed should not pass without correction but be polished to reach legibility. Her own writing she wanted to be lucid and dynamic; an article in Mother Earth displays Goldman’s combination of style and holistic view, “Must the Earth forever be arranged like an ocean steamer, with large luxurious rooms and luxurious food for a select few, and underneath the steerage, where the great mass can barely breathe from dirt and poisonous air? Neither unconquerable external nor internal necessity forced the human race to such life; that which keeps it in such a condition are ignorance and indifference.”

Anarchafeminisms of today are indebted to Emma Goldman for the central theories: free thought, free cooperation, free sexuality but also for the critique of traditional masculine methods. The French Revolution was not a natural force like the hurricane; the mistakes and cruelties of the Jacobins were not something unavoidable which must be reiterated, she writes in a letter to the physician and author Havelock Ellis in 1925: “I don’t understand what they mean by progress if they condone methods of the past. To me progress is not only change of ideas but also change of methods.”

Also art per se is obliged to Emma Goldman and her defence of the free spirit’s right to be conveyed without calculation and strict consequence analysis; the true author and artist expresses external and internal truths, the true artist does not adjust to reach success, she writes in the autobiography.

A famous thinker like Goldman – especially in the beginning with her uncensored therapeutic flow – takes great risks in the oscillating public diskussions and, sooner or later, she will collide with the tricks and traps of public life. It says a lot about personal cogency that she for decades succeeded to speak and write and create such large spaces of response (acclamation and opposition).

The philosophy of Emma Goldman with its political and intellectual honesty appears highly relevant in our time; as a reminder of the possibility and necessity for making love speeches to anti-authoritarianism; as an example of the great value of a profound view on feminist democracy and personal freedom: How free thinking defies the political power games and what this inspires you to reflect upon.