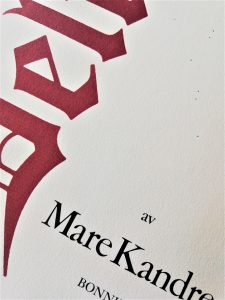 The poet Tomas Tranströmer, in a radio documentary, once recounted the ways in which nature lyrics could be received by the critics during the late 1960s: ‘If you included an animal or a straw of grass you were dismissed as a reactionary.’

The writer Mare Kandre’s Deliria from 1992 sang prophetically, however, no greater response was sighted to her civilisation critique.

The reviews of the translation of Joy Harjo’s A Map to the Next World (2000) from 2012 were, to no surprise, easily counted.

Today, a few years later, things are, as we know, different. ‘Eco-poetry’, ‘climate poetry’, and analyses in which ‘animals’ appear are noted and rewarded.

So then it is time to somewhat reflect upon the ways in which all our power marked discourses risk repressing the secluded word.

The new concepts for the old, the tendency to capitalize on obliviousness, the writing that suits an economic logic of constant demands for what appears to be new.

The imitation of and the arrogance towards those who analysed and protested early and in time.

The embracing of those who sing poems, but when it is too late, when the destruction and deportations have already taken place. When the deafness for the voices of the affected have made the voices die out.

In places where the production projects gained ground with devastating consequences for the environment, humans, and non-humans.

On other continents, but also here. Still no big Swedish publisher has taken on Sami eco and climate poetry, let’s say the poet Rose-Marie Huuva, and the rappers Sápmi sisters, giving witness to  the historical and continuing colonization, the mining, and the everyday discrimination.

Nor are poets who add the objectification of beings to poetry’s standard oscillation between distancing and merging, for instance the Malmö and Lund poet Rabinarayan Dash’s ode to pigs’ sense of the sun, included in the new eco and climate poetry.

Maybe it has something to do with the obligatory grand Scandinavian melancholy.

And, perhaps, the lack of translations of later Derrida, The Beast and the Sovereign, Derrida’s last seminar, starting point for the brilliant art exhibition of the same title, at Museu d’Art Contemporani de Barcelona (MACBA) in the spring of 2015.

Contribution to the debate about eco and climate poetry, translated from the Swedish, Den dolda ekopoesin