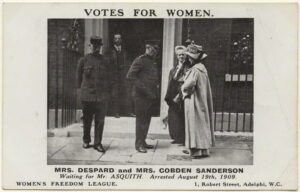 Emmeline Pankhurst with daughters Sylvia, Christabel, Adela? Time magazine once named the suffragette leader one of the hundred most important people of the 20th century. Millicent  Fawcett? Not as well known, but yes, of course – the one who led the law-abiding branch of the same movement.

And Charlotte Despard? Although famous among reformers of her time, not least as the founder of the most long-lived of the British women’s suffrage organisations, this fighter has largely fallen out of history. Perhaps the omission has to do with the fact that Charlotte Despard declared herself to be a socialist, and that the suffragette movement, despite the different demands of the overall women’s movement, is often portrayed as a bourgeois matter?

Or, on the contrary, that as a defected Victorian lady, she cannot be imagined as a suffragette? Maybe prejudice about age comes into play? The fact that Despard was well over forty when she started her activist career and nearly seventy when she formed the Women’s Freedom League (WFL) to promote the situation of female workers as crucial arguments for women’s suffrage?

Whatever the reason: highlighting Charlotte Despard is not only valuable in itself, but it also makes the image of the women’s suffrage movement more whole. Margaret Mulvihill’s Charlotte Despard, A Biography (London: Pandora 1989) and recently Lynne Graham-Matheson and Helen Matheson-Pollock’s Mrs Despard and the Suffrage Movement (Yorkshire: Pen & Sword History 2020) contribute to this.

The latter, in particular, follows Despard’s activism – which began at a time when a woman of her social class and age was expected to wait for the end of life in a corner of a private garden. All in contrast to old men who could look forward to increased activity and more powers in public life. One line of hers shows how she tackled  the question: ‘I was older when I was 20 than I am today.’ Uttered, by the way, long before Bob Dylan and Back pages’ ‘I’m  younger  than  that  now’ – and the author Dorothy Carnegie’s ‘Don’t  grow old –  grow  up!’

At just over 40, Charlotte Despard’s husband died, and she  was widowed. By law a woman of majority, she dressed in long veils and sandals – eventually her hallmark – and moved from a large house of servants to the poor quarter of Nine Elms in Battersea, London. Here, she used her husband’s capital to serve nutritious vegetable food, offering reading events and other activities to single mothers and their children, meaning most people in the area.

In Battersea, an urban counterculture arose; labour rights, women’s rights, poor care, prisoners’ rights; animal rights, vegetarianism; the independence of India and Ireland respectively; Charlotte Despard was elected to sit on many committees and became a valued speaker who used poetry to reach the audience. At one point, she was knocked over and hit in the head by a rock from an anti-voting mob – however, this did not stop her from entering the stage. In Margaret Mulvihill’s  biography, she is photographed as a passionate eighty-nine-year-old speaker at a major anti-fascist rally in Trafalgar Square in 1933.

Like many women’s rights campaigners, Charlotte Despard engaged in writing as well. The bibliography includes nine novels and a number of titles of non-fiction, including a 1913 title on women’s economic conditions. Statistics showed that the majority – seventy-two per cent – of the poorest consisted of women and children, who were not infrequently industrial workers. Labour struggle was therefore a struggle for women, and the revolution in the form of a flurry of gradual reforms, must be about overturning patriarchy. One way was to employ the ballot box. In 1918, when women became eligible for Parliament, Charlotte Despard stood for the Independent Workers’ Party in a campaign led by John Archer, neighbour of hers in Battersea, the first black mayor in London and one of the first in Great Britain.

After the country’s government ignored the demands of the suffrage movement in 1912, and several suffragettes died as a result of police violence on the streets and force-feeding in prison, a faction began to resort to guerrilla methods: fires, sabotage, and destruction of state and private property. The Women’s Freedom League, largely the work of Charlotte  Despard, and formed in 1907, offered alternatives to the path taken: civil disobedience in the aftermath of Hortensia in ancient Rome, Thoreau, and later Gandhi, who in turn was inspired by the suffragette movement.

In addition to female workers, the WFL gathered the movement’s vegetarians, artists, writers, non-heterosexuals; encouraged creativity in the fight and, as an organisation, distanced itself from violence. The association organised tax resistance, actions of civil disobedience in Parliament, hikes, and tours across the country and – perhaps most worth noting – boycotting of the 1911 census. More than 10,000 people left home and work and gathered in public places in protest of the misogynistic laws. 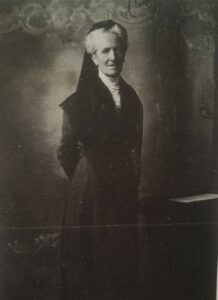 Unlike Pankhurst and Fawcett, during World War I, the WFL and Charlotte Despard continued to work for the equal suffrage of all women. She advocated pacifism and welfare policy and founded several peace organizations in defiance of public opinion and the government’s line.

In 1918, women over the age of 30 received the right to vote, given that they owned or rented a house or had a university degree. Ten years later, in 1928, equal voting rights were introduced for most groups of men and women over the age of 21. Residents in the female category in the empire overseas were still left out of the suffrage reform. In India, women were only given the right to vote when the country gained independence from The United Kingdom (1947). Charlotte Despard’s  WFL was then the only remaining voting association. The organization lasted until 1961.

When the Soviet Union was debated in England in 1930, Charlotte Despard and a number of sympathizers went there to make an assessment of their own. Being presented with realized ideals seems to have been overwhelming – in any case, the group did not manage to detect any problems. In their eventual defence, one may say that they did not know what we know today about the use of fraudulent propaganda.

Charlotte Despard belonged to a radical political direction on a spiritual basis in opposition to all forms of cruelty and injustice to man and animal. As a Catholic, Republican, vegetarian, suffragette, pacifist, socialist, and anti-fascist, she made many friends during her 50-year career – but also enemies. It would be strange and sad if this fact – she died abandoned and without resources – would lead to her work and methods of struggle being forgotten. Charlotte Despard has a place in public education next to Pankhurst and Fawcett – along with the many who gave their all for a better society.

Published in Swedish in Syre 10 September 2021