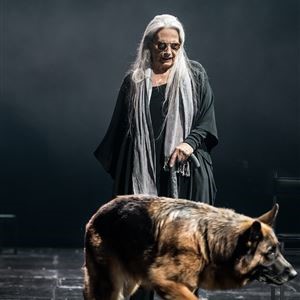 When the brothers died, one of them was king by agreement (Polyneices), and the other was still king, by his own opinion (Eteocles). One of the homicides was an attack to fulfil a contract, and the other was a defence to continue breaching a contract. Thus, the one who was buried as a king, was not the king. And the one who was left unburied, was in fact the king. When Antigone defends Polyneices by insisting on a dignified funeral, yes, a funeral of a king, she is, thus, defending the king. Or, put in another way, she is abiding by the law, while Creon is breaching the law.

Interpreted in this way, Antigone revolves around standing by, until death, the act of arranging a regent’s funeral. But, more overlooked, also around who is and may become a statesman. The brothers’ agreement to take yearly turns in reigning is an actual loosening up of the monarchy, and Antigone is honouring the brother who was adhering to the new order. Her lines – and Creon’s – show that she is conscious of her challenging of the power (the autocratic rule) and that her actions are a capability test verifying that she has the traits to shoulder a regent’s position. It is Antigone who is next in line to the throne after her brothers, not their father’s uncle Creon. Did perhaps Antigone and Polyneices have in mind a scenario of a wider democratic struggle?