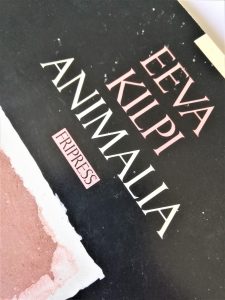 or a dog is not an animal

I wonder about the current trend to analyse new concepts for old phenomena. The trend to look away, forgetting the historical contexts of literature, forgetting earlier generations and places.

In recent essays in the morning papers the concept eco or climate poetry is applied as if poets of all times did not sing of nature relations, assaults on the environment and other beings. As if the trajectory in literature concerning animals was newly invented.

And although the specific strength of human culture and narration is the possibility to make conversation across centuries and continents.

I wonder especially about the literary telling of animals. Is there another category that may be spoken and written about as if those included were a lump? Defined without power analysis in lump,  discussed and characterized psychologically in lump ?

Jacques Derrida named the human constructed concept of animals, violence. The violence to gather and transform to a toy, to mere nourishment, to one and the same, to one sole thing.

Scientific facts show that there may be a greater difference between individuals within a species, than what may be found between the species. That there is a greater difference between, for instance, the personalities within a dog breed (although the breed was created and formed by humans to erase this variation), than can be found between dog breeds.

And yet, over time, there is stillness, and standardization. Voices and squawkings falling silent because of the current writing and its overlooking of history; wheels that are reinvented in eternal forgetting.

Published in Aftonbladet kultur 6th of August 2016, translated from the Swedish

See also, from 28th of August 2016, The hidden climate poetry