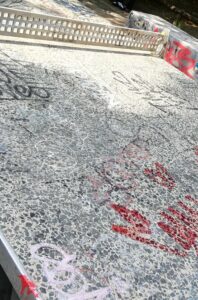 Which is the average depth of the Archipelago Sea?

I do not want to tell R things; I want to listen. Especially, I want to hear R talk about the islands of Rosala-Hitis and the fearless butterfly Parnassius Apollo with wings the breadth of the palm of her hand. “They came when I called out to them!” she says. As caterpillars they are black with orange spots and as butterflies their wings are white and grey with black and red spots.

We are sitting on the ground in the school yard, our toes liberated from our sandals, plucking in the gravel with our hands. The thing to do is to collect the leanest, darkest, and lightest, the most uniquely patterned, reddest, stones.

This is how they look; this is the exact colour of the granite!

Soon R must come to my house and stand on the veranda where our sea chart is hanging on the wall. She must look out over the living room floor where buzzing sanding machines have worked for weeks on the long planks. The floor is shining like water in the sun, the hue of the sanded boards being neither green nor greyish blue, but vaguely pink. When the sunrays from the porch windows fall upon the floor, we will crave to swim upon it.

R must see! R, who speaks with long a’s and i’s. R, who is more precise than anybody I know. R, who does not want to hear that the sea is deep without determining whether we are talking about several hundred metres, as in the Mediterranean, or just around fifty-five metres, as in the Gulf of Bothnia or the Bothnian Sea. Or am I referring to the average depth or the maximum depth?

So, I do not mention the previous summer and the passage from the farthest part of the archipelago, over the Åland Sea to the archipelago of thousands of rocks and islets. The weather was favourable with a five metres per second south-west wind. I, who during earlier summers had been seasick in the cabin, stretched out on the deck in the bow. I did not even feel cold, the rays of the sun bouncing over the long waves. Father let me take the rudder to steer and sail; sometimes he complained about how difficult it was to avoid the rocks just beneath the surface of the water, sometimes he rejoiced over the beautiful red and bare cliffs that were lying ahead of us. Father said that he could sight the floor down below although it was a sea; it was no deeper than that. When we had come some distance, we anchored, and dived from the stern of the boat. The water was saltier than in the Swedish archipelago.

Six degrees, says R. The salt content is six degrees. In the Swedish archipelago it is two degrees. R has not read my thoughts; it is mine that have wandered. R has picked up a red speckled stone; she pulls her thumb over it, rolls it in her hands, and puts it in the outer compartment of her school bag that lies beside her on the ground. R may come to my house. I will show her the sea chart and R will tell me things and she will point out the islands of Rosala and Hitis.

At night we swim, deep into the sea, our outstretched hands reach for the ground sediments. The salt in the water drifts beneath the surface. The sight is good, the light from the atmosphere beams through the sea down to the sea floor. Our eyes are open, we are heavy but lithe when, like seals, we shove away the water masses. Our skuas meet, bump against each other, and hold on. The depth is exactly 23 metres.

Neither of our mothers is fussy. But on this day, they coalesce as they spot us standing beside each other in the gravel of the school yard. We are both holding a bouquet of flowers in our hands. Mine consists of thin yellow violets, R’s of dark violet lilac buds, and we have just lured ourselves away from the school choir, the teacher, and the speech day.

R’s mother, in a skirt and jumper and skin-coloured nylons with a black snake pattern on the back, is first. The strass around her neck and ears rattle as she takes hold of R’s arm to head towards the rectangular tower blocks in the town centre. My mother is not as determined, but she also takes a step forward to braid her fingers in mine and aim in the opposite direction.

Later we will swim, grey seal swim, R shouts. She has probably twisted her neck our way and is surely backpedalling the speed of her mother by leaning her upper body backwards. I do not know, I did not see it, but I replied into my mother’s shading op-patterned trouser suit that aspired towards the settlement of family villas, that, yes, we will.