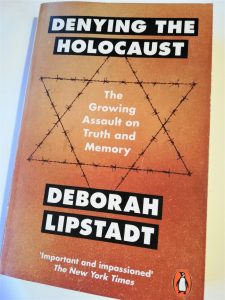 Do holy principles exist? Is it possible to weigh principles against conditions? Alternately, combine them with parrying practice? In a foreword, the author Dalton Trumbo tells the story of how he, during the second world war, refrained from republishing his classic anti-war novel Johnny Got His Gun from 1939, written in 1938. The decision was made after a Nazi supporter had sent Trumbo a fan letter thus proving that the message of the book risked getting employed in American Nazis’ propaganda for peace and pacifism.

Nazis as negotiators and peace-makers? Hardly the image most people have of the Nazis, but that is how they desired to appear both in Europe and the USA. Nations and persons and minorities refusing to comply with the dictates were, according to the Nazi propaganda, against peace and were depicted as guilty of invasions and persecutions. An infamous illogical politics: If you do not abide to us invading you, we are forced to invade you. If you do not abide to us obliterating you, we are forced to kill you. Everything is your own fault, we only wanted to keep “the peace”. In the USA, Nazis could be seen demonstrating in the streets of New York carrying signs with pacifist catch phrases stolen from the peace movement.

Yes, a passive USA had without question played into Hitler’s hands. Something Dalton Trumbo in the name of art and politics did not want to contribute to. The passing of time and events changed his book, and the political forces could mishandle the new readings. In this way, in the moment, self-censoring was the bestselling peace appeal’s destiny. In order not to turn into a useful idiot for the Nazis, Trumbo considered facts about the surrounding world. A decade later, following the end of the second world war, the political situation was different – and the novel was republished (1959 and 1970).

When Dalton Trumbo realized the state of his novel, he, as a political leftist, had already unveiled the intentions of the Nazis and their false message of peace. However, not everybody was as politically aware, erudite, and up-dated. Many people were fooled – or let themselves be fooled. Almost everyone may be deceived by deceitful main figures. Today, with strong reactionary forces around, armed with old and new strategies for old and hidden agendas, this is something to keep in mind. Not everything is what is seems to be, and that which seems to be, may in actuality be the case.

Whereupon today resting argumentative books become up to date. In Denying the Holocaust (1993), the American historian Deborah E. Lipstadt, recently on a visit to Sweden to present her new book Antisemitism Here and Now (2019), shows how right wing figures, since the second world war, have acted to present Nazism as conceivable and on the level. Lipstadt discovers a new tactic: At first, they made attempts to exculpate the Nazi German politics and the Holocaust, then, when the attempt failed, they started to deny the facts. Interestingly, she also finds that these extreme right people generally encompassed anti-feminism with outspoken misogyny as a central ingredient.

For her critical and sharply written book, Deborah Lipstadt was sued in Great Britain by denier and historian David Irving – a trial she won and related in her book History on Trial (2006), adapted for the screen by Mick Jackson as Denial (2016). Besides the offending of the victims, Holocaust denials are in itself a strange phenomenon. How may one contradict something so certified and researched? How may anybody want to reveal themselves as fact resistant beyond all reason? Unfortunately, they know what they are doing, says Deborah Lipstadt. By repeating lies over and over again, they are able to plant seeds of doubt. In this way, they manage to create confusion simultaneously as they may be perceived as standing on “the other side of the debate”.

People less familiar with science and knowledge – the public, journalists, politicians – risk  being blindsided, says Deborah Lipstadt, by these abusers of freedom of speech clad in well-tailored costumes and fashion blouses. In the Canadian documentary Prosecuting Evil (2018) by Barry Avrich, the Chief Justice of the trials against Einsatzgruppe, Benjamin B. Ferencz, tells about a Nazi officer’s humanitarian facade. It is a short sequence spotlighting the Nazi camouflage tactic. The officer’s pleasant manner facilitated the deceits more effectively. Look here, our intention is to take care of you; our strive is the absolute peace.

That is, peace under the boot heel. Fascism and Nazism’s modus operandi. The total lie, the complete indecency. The Nazis named the suburb of Auschwitz, Theresienstadt, “the city that Hitler gave the Jews”. Clean, neat and perfect, nothing offensive close to the curtain, nothing seen near the fence. A scene hiding a reverse reality. When it was too late, the truth was revealed. The smiles and the peace were a grimace. And the benevolence and helpfulness the first step towards exploitation and killing. 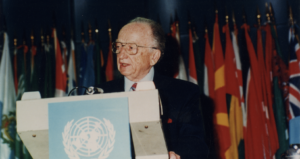 About this method of fraud has been testified many times. So, what happens if the slipping in of horrible ideologies and practices happens later on, when they are conceived as decidedly illogical and forever discarded? A situation Lucía Punezo describes in the fiction movie The German Doctor (2013), based on a factual event in Argentina during the 1960’s. The movie begins in what constitute everyday smoothing between human beings – trust, empathy, and rationality – and shows how these essentials may be deployed to mislead and break others.

In the Nazi and Fascist obstruction, confidence in the other person is eroded and belonging to the female category implies being perceived as the most desirable object. And, thus, being exposed to existential horror. Is there on the whole anybody that I may trust? May anything at all be taken as a given? Once ordinary confidence is broken, each and everyone is left to moral and political suspicion, doubt, and confusion.

Which then is the practical conclusion? How may fascist forces be met and resisted – with remained human feeling? One sustainable answer is that lectures in democratic values and history must be given continuously and start early in life. For the public discusson, Deborah Lipstadt gives the advice not to debate deniers of facts, especially not Holocaust deniers, since to be seen on the same arena make them appear as legitimate opponents and contributes to spreading their message.

Deborah E. Lipstadt’s recommendation is as follows: do not forbid their speech, let them speak, oppose them. But do not assist in giving them a platform. Do not give them space, do not legitimize them as a counterpart. Participating in a panel is a kind of commission of trust, which is why freedom of speech for everyone is not on par with a place in the panel. Deborah Lipstadt’s solution combines self-defence, arriving from historical and today’s facts and experience, with the honouring of democratic and humanitarian principles. An advice that fits our time.