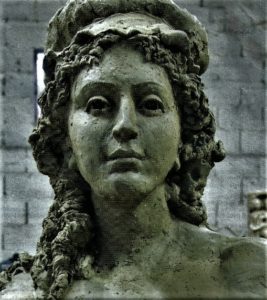 Mention the French Revolution and Maximilien de Robespierre and you will find yourself in a dispute continuing throughout the night. Mention Olympe de Gouges and you are met rather with silence. Was she perhaps a champion of the women’s cause? Incidentally, women during the French Revolution, were they not all impressive however revengeful Madame Defarges as in Charles Dickens A Tale of Two Cities?

Many people hold their own – rather firm! – opinion about the most decisive revolution in European history. Presumably marked by the fact that school literature in history cites male names to the extent of almost ninety percent (Sweden), leaving ten to fifteen percent to female names, facts shown by the daily newspaper Dagens Nyheter, 15th of January 2015 and confirmed recently by Swedish Television.

So, let us say that each and everyone’s image of the historic event needs some enrichment. In most of what has been written about the French Revolution, the women, if present at all, are depicted as somebody’s wife. To be sure, unpaid female labourers and supervisors played the part of considerable, yet not acknowledged, political figures. But is luring the father, the brother, the husband, the male friend, or colleague the only political manoeuvre pursued by people in the female category?

If there existed a group that can be said to have initiated and driven the French Revolution, it was the women. The sweat shop workers, the seamstresses, the washer women, the women of the marketplace. The intellectuals of the salons and clubs and the cultural workers at the theatre. The march on Versailles is the women’s march, many of the propositions adopted in the National Assembly, and later in the Convention, were proposed by the women.

They carry arms, they use violence and they fight among themselves. But they are also a significant force behind the fact that the Revolution was not as violent as is usually presumed. Only twelve percent of the Revolution’s popular events developed into brutality, and murders, according to Micah Alpaugh’s Non-violence and the French revolution political demonstrations in Paris 1787–1795 from 2014.

Yet, as is noted, the Revolution collapsed. The Revolution which established and encouraged an equal view of human beings and came to inspire people all over the world to rebel against slavery and dictatorship. The Revolution which inaugurated suffrage for white men and abolished slavery within the French Empire. But which started to execute political opponents within their own circles. As is known, the guillotine became a vehicle for censorship also devouring those who had given it order for its use.

That is, a vehicle of expurgation for the republic, which, less well-known, had persisted in denying active citizenship to the category of women. One of the first women to be condemned publicly was Olympe de Gouges, born out of wedlock to a daughter of a washer woman and a local landlord in Montauban in the south west of France. A single mother with a chosen name, Olympe de Gouges started a career in Paris as a playwright and was an outspoken literary figure. She deliberately decided to act in the role of an independent writer: ‘Nothing ought to be hidden. The writers with the most integrity ought to say what they see, hear and feel; to me there exist no parties’, she writes just before the outbreak of the Revolution.

Olympe de Gouges’ themes evolved into what would today be called classical feminist. Mental and bodily integrity, political rights, education, criticism of the sexual double standard. The situation for workers and marginalized groups, the elderly, children like herself born outside of marriage. Reforms concerning equal rights for men and women to divorce, and rights for children born out of wedlock, were accepted by the Convention. The proposal for a voluntary progressive tax became a reform which was accepted early on by the National Assembly. The French Socialist Party’s Ségolène Royal embracement of Olympe de Gouges in her book Cette belle idée du courage from 2013 should come as no surprise.

Indeed, de Gouges’ work of plays, philosophical theses, manifest and debating essays may be the first to show how the personal and the political are connected. She revealed the oblique and circumscribed conditions of citizenship, shaped tabooed issues, and widened her feminism by criticizing the French slave trade; already in 1784 Olympe de Gouges created her critical play L’Esclavage. With typical audacity, she attacked the justifying references to nature and ’the animals,’ pointing out the actual guilty party of the slave trade: the colonists and their economic interests.

Especially the last-mentioned made de Gouges into a target for sabotage, slander, and intrigues. The commentaries about her as a playwright at the national theatre Comédie Française, were sarcastic and condescending; as one critic argued: To write good dramas a beard on the chin is required. In addition to women’s rights and the criticism of slavery in de Gouges literary oeuvres, there was the most provoking theme for her contemporaries: the abhorrence of violence. During the Revolution, Olympe de Gouges is the only person in the female category who, in print, criticized the exaggerated violence and death penalties.

And this, too, when enemies were affected: ‘Even the blood of the guilty befouls for ever the Revolution when it is effused profusely and cruelly,’ she wrote. In the beginning, and like most of the leading revolutionaries, including the women, since their only political status was as royal subjects, Olympe de Gouges favoured a constitutional monarchy. However, she was soon radicalised into giving her support to the Republic. But, she contended, the right to upheaval, proclaimed in the sensational Declaration of Human Rights (1789), does not acquit one from the duty to act with compassion: to sustainably transform the king into an equal, let the king survive the abdication.

When reporting on other people escalated, Olympe de Gouges proposed verbal duels as a means to solve interior conflicts and exhorted – to no avail – her revolutionary colleagues to meet her in literary duels. In the National Convention, the deputies responded by satirising de Gouges ‘revolution with rose Water.’ One of them admitted that there was more than one way to freedom, also the one ‘sprinkled with roses’. De Gouges replied that she for one, and for the sake of the Republic, had the courage to throw herself in the Seine with her feet tied to a set of cannon balls – on condition that Robespierre followed suit.

A partly prophetic suggestion. Not long after, in the summer of 1793, de Gouges was arrested for having protested the death penalty, criticized the government, by suggesting a national referendum, and for challenging the female gender role. When terror politics was voted for as a law in the Convention, and Robespierre had reached full power, she, in smuggled-out pamphlets, accused the male rule of making itself guilty of contra-revolution: ‘Is not freedom of speech and freedom of the press humanity’s most precious inheritance, treasured in article VII in the Constitution? Your random acts and cynical enormities ought to be condemned by the entire world.’

Polemical and pedagogical. Capricious, incorruptible, impossible to categorize. The Republic, which had profited from the female category and Olympe de Gouges’ large input to the Revolution, did not listen to de Gouges. It did not have to. Patriarchy constituted foundation, floor, and walls in the societal feudal pyramid which the Revolution challenged but never succeeded to tear down completely. La ‘Patrie’ was the mother-land liberated from monarchy – for men. As Carl-Göran Ekerwald writes in his book Frihet, jämlikhet, broderskap from 1988 and 2013, the French Revolution constituted Europe’s most important contribution to the spiritual history of humanity. And yet, one might ask if a feminist revolution may not have amounted to as great, or even greater, a transformation.

With her Declaration of the Rights of Woman from 1791, Olympe de Gouges pinpointed the largest restriction in the Revolution’s human rights, the exclusion of the female category, and male gender as a criterion of full worthiness. The people in the category of women – with its economic, social, religious, bodily, amorous differences and variations – were never ascribed active citizenship during the Revolution. The 30th of October 1793, some days before the execution of Olympe de Gouges, the Convention withdrew the informal right of women to assemble and speak at political meetings and discussion clubs. A few years later Napoleon attained power as a dictator and most of the French Revolution’s democratic landmarks were repudiated.

Who is given the power to speak? At all times, the right to express oneself threatens authoritarian rule because such powers tend rather to pose the question: Which is the political implication of this statement? What are the results of this utterance in relation to the maintenance of power? Freely expressed conversations, testimonies, and stories, especially from the excluded and marginalized, confront basic power relations – and are thus given less or no value.

However, this may be true also for a limited democracy, such as the early French Republic, given the perspectives of the revolutionaries in the female category. We conceive of freedom of expression as the right of the individual and overlook the fact that circumscriptions may also affect the group, in this case the status of woman employed as a formal hindrance for civil and political rights; the politics of exclusion thus affects the individual, the category, and society as a whole.

The peaceful Revolution – Rosewater of the Revolution – was never perceived by the ruling male revolutionaries as a possible course, although it may in the long run have been the most viable. Olympe de Gouges’ male contemporaries did not take her ambitions to act as a statesman seriously. However, it is just as likely that she, a proto-feminist backed by the female category, both created and died for one of democracy’s most essential elements: the role of the critical activist writer.