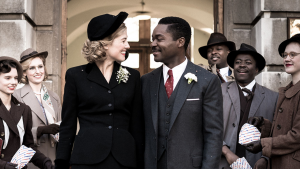 Consider all loving relationships that were hindered due to society’s classifying in either confirming or deviating from the stated pattern. Relationships of love which were stopped, but defied, and survived, and moved mountains. Two jazz lovers with a sense of humour run into each other at a ball in London. The year is 1947, one of them has been a volunteer during the war and is now working as a clerk at a lawyer’s firm, the other is a law student at the university. After a few weeks of dating, they decide to get married.

It may sound somewhat trivial. Two people meet, find a common vibe, fall in love for life. Happens all the time. However, Ruth Williams is white and Seretse Khama is black; moreover, he is the successor of the British protectorate Bechuanaland, today Botswana. The couple’s love turns into an intercontinental political subject of highest concern; both the British colonial rule and the families try to avert the liaison even though there are no legal obstacles either in Bechuanaland or in Great Britain.

But the racism of the period is deeply entrenched in the economic and political conditions of power. South Africa’s prime minister Malan, followed by the Nazi sympathizer Strijdom, instates apartheid and bans marriages between black and white people; upon which Bechuanaland, neighbour in the north, becomes a haven for ANC notable activists Nelson Mandela, Oliver Tambo, and the author Bessie Head. A mixed prince couple harbouring democratic ambitions and settling down in Bechuanaland is unthinkable to the white minority government of South Africa.

And Great Britain prioritizes its own economic interests – the British mining companies’ activities in South Africa – and obeys the South African demands.

On the 10th of March the film director Amma Asante’s [Belle] excellent A United Kingdom premieres. The film is based on Susan Williams Colour Bar, the Triumph of Seretse Khama and His Nation, a book documenting every diplomatic turn and every protest campaign in the battle concerning the existence of the Khama couple.

Large sections of the people in Bechuanaland backed the Khama couple by boycotting  British taxes, and by refusing to cooperate; support organizations in Great Britain cultivated opinion and assisted mass media with argument and facts; racists holding bureaucratic key posts in the British imperial rule were replaced with more enlightened people.

At the same time, students returned from elite universities in the West and created African independence movements that challenged the British colonial system. Supported by a women’s revolution, an overlooked and decisive event told about in the book, but rather skipped over in the film, Botswana became a democracy including women in 1996 with Oxford-educated Seretse Khama as president.

It must be noted that there was a female candidate to the position, Oratile Sekgoma, whom the British refused to cooperate with. A woman in the highest office of the nation “was out of the question”, according to the British. Perhaps it was easy to forget who resided in the seat of honour back home.

Undoubtedly, the love between Ruth and Seretse contributed into shaking the British empire. However, for many years they fought in vain against the economic and political power plays. A private situation construction worker Richard Loving and home worker Mildred Loving in the USA of the 1960’s most probably would have identified with. In Jeff Nichols empathizing film Loving, following Nancy Buirski’s documentary The Loving Story (2011), shown at the Gothenburg Film Festival in February, the couple Loving, she categorized as black, he as white, has a formal certificate to prove their marriage.

To no avail. The police arrests and extradites the newly wed from the state of Virginia. Either they get divorced and move back or they stay wedded and are forbidden to return home. The discrimination laws of Virginia destroy the future of the couple Loving, but racism cannot destroy their love. To both the Lovings and Khamas the option to give up did not exist, their love gave them no choice. Even Richard Loving was affected by racism and was critiqued and heckled by both white and black people. Ruth Khama equally, especially in Bechuanaland, where, among other things, the white colonists shut her out from social life and denied her entrance at hotel restaurants.

How wonderful then that Mildred Loving’s effort for the right to love turns out to be decisive. Mildred’s external environment monitoring of protest marches on television gives her the idea to write to Robert F. Kennedy, who furthers the issue to a law firm willing to take on the case without billing. The case is tried with success in the Supreme Court, which constitutionally abolishes the ban on interracial marriages, accordingly in the sixteen American states in addition to Virginia that still had racial laws.

The couple Khama opened the eyes of the world to loving relationships regardless of skin colour. The case of the couple Loving became the tipping point that made loving legal in the whole of the US. And eventually with an even wider significance: In 2015, in Obergefell vs Hodges, the verdict in Loving vs Virginia was used to criminalize the discrimination of gay marriages in the US.1 Earlier that year, a resolution acknowledging equal marriage rights including same sex couples was adopted by the European Parliament. A reform that was instituted in Sweden 2009, and recently in Finland (1st of March).

Marriage, or not marriage. Living together, or not living together. Loving relationships, or not loving relationships. The choice ought to be voluntary and equal for all. Every year, the 12th of June, Loving Day is celebrated in the USA in remembrance of Mildred’s and Richard’s victory in the Supreme Court 1967. The celebrators are most often of divergent sex, but an increasing number of freely sexed people have started to party before Pride.

Since everyone’s right to be who they are, or want to be, and everyone’s right to love whomever they want to love, dissolves many borders. Considering the dubious attitude of the American president (D.T. 2017) towards human rights, awareness of this kind is more urgent than ever.

Originally published in AAM 4th of March 2017, translated from the Swedish