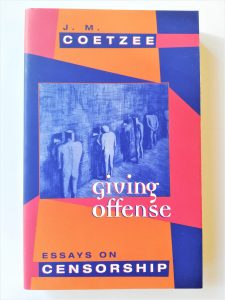 Reading animality in the fiction of Coetzee

During the 1960s and onward to the beginning of the 1980s the South-African apartheid regime administered one of the most comprehensive censorship policies in the world. Not only books, magazines, films, theatre plays, but also children’s toys, key rings – everything that might contain unwanted messages – were examined. How state censorship affects literature is discussed by the South African author J. M. Coetzee in his anthology against press censorship: Giving Offense, Essays on Censorship, University of Chicago Press (1996).

An author subjected to scrutiny sharpens their means of expression and finds ways to get past the censors. But they cannot eschew the effect of internalised monitoring – an unaware gagging doing the job for the censor. Mentalities that must be the dream come true for all state censors: Citizens watching over themselves! The philosopher J. S. Mill observed an additional level: ‘censure’, the prevailing public opinion as social tyranny, implying intolerance against deviant feelings and opinions, and thus silencing debate. 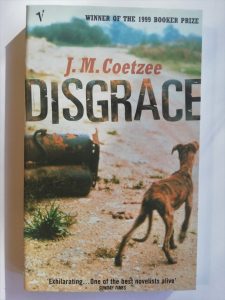 A few years ago, in the year 2000 – six years after the abolition of the apartheid system – J. M. Coetzee was criticized for having written pessimistically about the Rainbow nation’s possibilities to survive (the possibilities for blacks and whites living together). A Member of Parliament raged at the novel Disgrace (1999), interpreting it as a murder on the dream of equality in South Africa.  Today the book is used in the South African schools. For a writer, whose authorship is marked by subtle – read censorship smart – criticisms against apartheid, the attack must have felt like cruel irony.

In several of J.M. Coetzee’s books there is an overlooked theme: the relation between humans and other animals, and the ethical questions this relation gives rise to. It can hardly be asserted that animal ethics discussions are exposed to conscious censorship directed by the state. Nevertheless, animals are exposed to comprehensive legal exploitation in the meat- and pharmaceutical businesses, and of this exploitation there seems to be general acceptance. Thus, there is a risk for Mill’s ‘censure’: neither the state nor the public has an interest in validating questions about the plight of animals. Interesting, then, is the role the animal theme plays in the drama surrounding Coetzee’s novel Disgrace.

In an article in Journal of Literary studies (2001) the South African literature scholar Wendy Woodward shows how animals in the novel Disgrace may be read as being real beings, rather than, as is usual, as mere metaphors for human lives. And suddenly the terms change for the kind of political interpretation Disgrace was exposed to.

Only if the animals in the novel are read exclusively as metaphors, the interpretation ‘murder on the dream of a rainbow nation’ becomes conceivable; and the last sentences may even appear as scornful:

‘Bearing him [the dog] in his arms like a lamb, he re-enters the surgery. “I thought you would save him for another week,” says Bev Shaw. “Are you giving him up?”

Is the dog one with the dream of equality in South Africa? Has the dog a value of his own? Or are both readings important? If the animals in Disgrace are seen as real individuals, the text is transformed. The tone in the novel changes, another dimension is added, and the death of the rainbow dream becomes unjust, and sad. The protagonist, the aging white man, becomes a disillusioned participant in the murder/murders of the homeless animals, and his daughter’s pregnancy (she keeps the child, the result of a gang rape) becomes the – however tragic – seed to the realisation of the Rainbow dream. Not side by side but in coexistence.

Who would have thought this? That forgotten dogs could lead Parliament Members astray? Without animals, there exist no chances for an equal future.

The interpretation of Coetzee’s animals as bearers of real life rather than as only metaphors is strengthened by Coetzee’s and Amy Gutmann’s book The Lives of Animals (1999) where the situation of animals in the grip of human power constitute the main theme. The book consists of two lectures given by Coetzee at Princeton University about the fictional author Elizabeth Costello, who in turn gives two lectures on the subject of animal ethics at an American university. 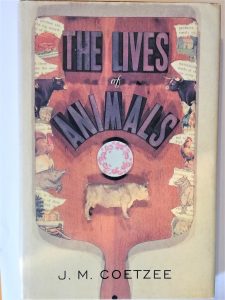 Who is saying what? Is Costello Coetzee? Does Coetzee with his form experiment show awareness of the conditions for discussions on animal ethics? Is the hybrid form of the book a way of evading the informal censorship, J. S. Mill’s ‘censure’? Coetzee’s texts have been commented upon by four scholars. The question from literary scholar Marjorie Garber captures the essence of the book’s theme: Are these lectures in fact not about animals but about the value of literature?

However: Why not both? And: Why not also about ‘censure’? The significance of the animal theme in Coetzee’s authorship is strengthened once more by Coetzee’s recent title Elizabeth Costello, eight lessons, where the author’s texts in The Lives of Animals are included as the longest lessons, 3 and 4. Here the role of animals in literature and in human society is of importance not only to the interpretation but also in relation to the authorship as a whole. In the Swedish edition, the two lessons have disappeared, and the subtitle ‘eight lessons’ has been changed to ‘six lessons’ – without any information about this in the book.

In other words: A novel (the English original edition) has become a completely different novel (the Swedish edition) under the pretence of being the same. An illusion is created. The field of vision and the interpretive variations have been curtailed. The protagonist, the author and feminist Elizabeth Costello, has been reduced and the animal chapters (the texts in themselves and the animals in them) have been transformed; from being alive, to being invisible, non-existent. And all of this happening under the utmost silence.

So, the significance of the animal theme becomes once again a kind of politics. In this case there is a soothing paradox: as absentees it is hard to play a greater role.

Translated from the Swedish