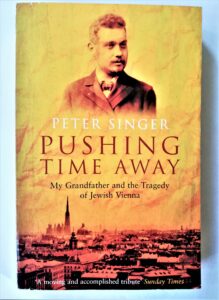 A Biography of a Grandfather and his Vienna

Machatunim, a library of German and French novels, illustrated art books, works of the ancient Greeks, translations of the Russians classics, and a prostate surgery. This is the list of reasons explaining why the maternal grandparents of Peter Singer, philosopher at Princeton, one of the discoverers of late modern animal ethics, did not attempt to flee from Nazi Germany and Europe in time.

Machatunim is Yiddisch for the relationship between the respective parents of a married couple. The fact that there exists a specific word is a testament to the Jewish culture’s love of family and relatives; you do not abandon your next of kin when the situation becomes precarious. Or, for that matter, forsake your cherished library. Singer’s grandparents, Amalie Oppenheim and David Oppenheim, having lived in Vienna for most of their lives, simply could not imagine that they would become persecuted or deported. David Oppenheim, decorated with war medals following his service on the German side in World War I, could not.

The word for the night between 9th and 10th of November 1938, “Reichkristallnacht”, is a Nazi euphemism for the action when people were murdered, synagogues burned down, businesses destroyed, homes plundered, and thousands of people were sent to the concentration camps of Dachau. The pretext for the action was the killing of a Nazi embassy official in Paris, by the seventeen year old Herschel Grynszpan revolting against the anti-Semitic politics and pogroms. The night was followed by professional bans, boycotts of businesses, harassments in the streets, deportations. Thereafter it was clear that emigration must be the route to survival.

Yet Amalie Oppenheim and David Oppenheim endured. They belonged to the older generation of Vienna, centre of Europe during the Habsburg era, a city which had given equal rights also to Jews and had welcomed Jews immigrating from Eastern Europe. In actuality, the Jewish intellectual culture thrived, merging fruitfully with the traditional Austrian ditto. Opera houses and theatres played for full houses, socially progressive conversations and disputes could be heard everywhere at food stalls, cafés, and restaurants.

In Austria, especially in Vienna, and in contrast to Germany where Jews were kept from holding central positions, Jews managed the steel corporations, built the railroads, established banks, owned many of the city’s shops, edited the morning papers, founded hospitals, and made up the majority in the corps of physicians. Despite the everyday anti-Semitism, Jews also dominated Vienna’s culture and politics; in 1919 the city became the first in the world with a social democratic majority, including several Jewish politicians.

In Pushing Time Away, My Grandfather and the Tragedy of Jewish Vienna, Granta books 2004, Peter Singer tracks his grandparents at the very site in Europe. Through letters, articles, and interviews with still living friends, their life is narrated, foremost the grandfather’s, together with the politics of the day, and together with Singer’s own thoughts about himself and his grandfather.

Amalie Oppenheim, brilliant student of natural sciences, was encouraged to continue at the university. David Oppenheim, classical philologist, and professor, became, during the decades that preceded the Nazi takeover, one in Sigmund Freud’s inner circle and a member of Psychoanalysis’ editorial board. In collaboration with Freud, David Oppenheim authored a book about symbolism in folk tales; regretfully it was not published as David left Freud for the psychiatrist Alfred Adler’s intellectually more open attitude. Adler’s theories stood out as sympathetic; the feeling of togetherness was as strong a motivational power as sexuality; every individual is frail and possessed by complexes; together with fellow human beings emotions of inferiority may be combatted.

Amalie Oppenheim and David Oppenheim engaged in intellectual and moral issues concerning human nature. Both were tolerant to human sexuality and fell in love with and had erotic relations with both women and men. David Oppenheim’s outlook became feminist oriented and socialist sympathetic, in opposition to the Jewish tradition but with universal core values. Characteristic is David Oppenheim’s reaction when he is informed about the high status his children has gained as whites in their new country, Australia: “[A]nyone who, having themselves been reduced to a pariah, finds consolation in regarding someone else as still lower, basically sanctions what is done to him.”

Peter Singer’s reflections on a grandfather he never got the opportunity to meet are indeed sincere, however the critique of the decision to stay in Vienna seems a bit harsh; it is not difficult to understand reluctance to start anew in a foreign country. It was in Vienna Amelie Oppenheim and David Oppenheim had given their all and it was here they wanted to remain until the end. More difficult to understand is why Amalie Oppenheim’s life is left in the shadows. Perhaps the reason is that Amalie Oppenheim survived the deportation to Theresienstadt while her husband did not; in that case, this explains but does not justify the circumscription in focus.

In 1942, the most celebrated of Vienna’s artists, writers, musicians, war veterans were sent to Theresienstadt to deceive them, the world, and the International Red Cross with a Potemkin façade; in the propaganda, Theresienstadt was presented as “the paradise ghetto”. When having nearly reached the destination, sixty kilometres outside of Prague, the Oppenheim’s belongings were confiscated along with David Oppenheim’s insulin for diabetes. Behind the deftly arranged inspections, behind the deceitful frontage, in the reality of the ghetto, people were dying of illnesses and hunger or they were, in the deceptive language of the Nazis, “transferred” to the death camps of Auschwitz.

The fate of the Oppenheim’s, and the fate of Jewish Vienna, is narrated by Singer as a tragedy, a moral collapse. From humanism, faith in education and social equality, to eradication. The values the Oppenheim’s so truthfully believed in were defeated; from having laid the foundation of the social reformist rule of Vienna and having saturated much of the city’s open and tolerant cultural climate, these values were replaced by the worst, a fascism more terrible than ever; the fascism that burns books rather than discusses the content. “Red Vienna”, Singer says, was not in time to build a societal tradition so unfaltering that nobody would want an authoritarian rule.

Peter Singer’s urgent biography ends on an optimistic note. The racism which downgraded Amalie Oppenheim and David Oppenheim, and which murdered David Oppenheim and millions of others, was eventually rejected by the Universal Declaration of Human Rights (1948). The International Criminal Court was installed for the purpose of condemning genocide and crimes against humanity, no nation in the world embraces racism openly. Although mass murder since the second world war was and still is enacted, and although the work for human rights is slow, it is equal values that is the future.